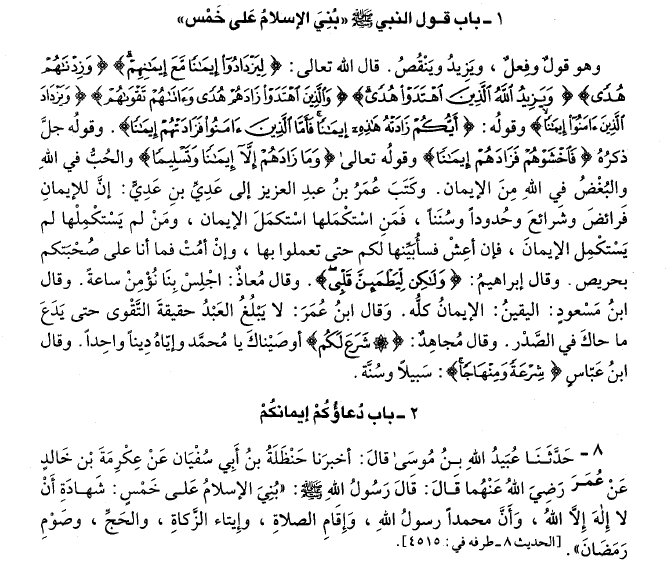 Chapter 1: The saying of the prophet (peace be upon him) “Islam is built upon five”

It is speech and actions. It increases and decreases. Allah (SWT) says, {So that they can increase in Iman on top of their (current) Iman} [Al-Fath:4], {And we increased them in guidance} [Al-Kahf:13],  {And Allah increases the guided ones in guidance} [Maryam: 76], {And the guided ones, He increased them in guidance and made them attain piety} [Muhammad:17],  { And the believers will increase in Iman} [Al-Muddathir:31],  And His saying {Which of you has this made them increase in Iman. As for the believers, it increased them in their Iman} [At-Tawbah:124], And His saying {So fear them, So this increased them in Iman} [‘Al-Imran:173], And His saying {And it did not increase them except in Iman and submission} [Al-Ahazab:22]. Love for the sake of Allah, and hate for the sake of Allah is from Iman. Umar bin Abdil-Aziz wrote to Adi bin Adi: “Iman has obligations, legislations, rulings, and traditions, so whoever has completed them has complete Iman, and whoever does not complete them does not have complete Iman, and if I live, I will explain them to you so that you can act by them, and if I die, I am not eager for your company (i.e. to stay in this dunya)”. And Ibrahim said, {So that my heart can be tranquil} [Al-Baqarah: 260], And Mu’adh said, “Come let’s believe (have Iman) for an hour”. And Ibn Mas’ood said, “Certainty is all of Iman”. And Ibn Umar said, “A slave does not comprehend the reality of piety until he leaves what wavers in the chest (heart)”. And Mujahid said about the ayah {He legislated for you from the religion} [Al-Shura: 13] “We have given you O Muhammad and him one religion”. And Ibn Abbas said about the ayah, {Legislation and a way}  [Al-Ma’idah: 48] “Pathway and tradition”.

On the Authority of Umar (May Allah be pleased with him), that the prophet (peace be upon him) said, “Islam is built upon five: the testimony that none is worthy of worship except Allah, and that Muhammad is the messenger of Allah, establishing the prayer, giving zakah (charity), performing hajj, and fasting Ramadhan”

Benefits and Action points to take from this introduction:

One thought on “Book of Iman: Hadith 8”